Everytable Is Proud to Announce Its Sixth Store Opening In Compton

The Compton store will mark the largest store to date, and Everytable’s mission is to make healthy, nutritious and good-tasting food accessible to this historical city.

(Compton, CA) Everytable will host a Grand Opening of its sixth store in Compton on September 26 from 11am to 2pm. This day will be filled with free food, fun, music and celebration.  Everytable will be the first restaurant of its kind in Compton. Its mission is to make nutritious, fresh food affordable and accessible to all. Everytable aims to redefine the food landscape the same way McDonald’s did fifty years ago. However, this time, instead of burgers and fries, it is healthy, made-from-scratch food, at fast-food prices.

The City of Compton has a rich history, and was one of the oldest cities in the county of Los Angeles dating back to the 1800’s. Compton is an excellent example of how neighborhood demographics change over time. Early in Compton’s history, residents were predominantly White, and for a brief period of time was the home of two former U.S. presidents. George H.W. Bush and his family (including George W. Bush) resided in Compton in 1949, when he worked for an oil company. As African American residents were allowed to move into Compton in the 1950’s many White residents began to move out. Over the subsequent decades, more prosperous African Americans moved into Compton, and it became 65% Black.

Today, Compton’s population is nearly 100,000 and is 30.6% African American and 66.3% Hispanic, and over 30% of the residents are immigrants. Though Compton’s housing costs are above the national average, 25.5% live below the poverty line. Compton has been a blue-collar town with heavy manufacturing, shipping and transportation workers, with only 60.8% of the residents with a high school degree and less than 10% are college educated.

Additionally, Compton has been identified as a food desert. As defined by the U.S. Department of Agriculture (USDA), “food deserts” are “where access to healthy food is limited or non-existent due to a lack of grocery stores, farmers markets, and other providers of healthy food. Consumers in these (mostly urban) areas instead depend on “quickie marts,” which offer processed, sugar and fat-laden foods.” The USDA further “defines a neighborhood a food desert if at least one-fifth of the residents live in poverty and one-third live more than a mile from a supermarket in urban areas, or more than 10 miles in rural areas, where residents are more likely to have cars.” (Source: American Nutrition Association Newsletter)

Studies show that lack of access to fresh fruits, vegetables and other nutritious food options contribute to the high incidence of obesity, diabetes, cancer, hypertension, high cholesterol and other physical and mental health complications in residents of these very communities. These neighborhoods are disproportionately made up of poor, low-income Hispanics and African Americans and immigrants. When busy families lack the time to prepare home cooked meals, fast food is often the go to option based on convenience, cost and limited options that are in close proximity. Tasty “grab and go” meals that are reminiscent of family/cultural favorites and are priced to compete head to head with QSR/fast food restaurants within these food deserts provide alternatives with long term and far reaching impact.

Everytable understands the demands of the marketplace, consistent delivery of products and services, and has executed an evolved business model to help balance the injustice. It has made the commitment to address the food injustice felt by millions throughout Los Angeles through its innovative food delivery platform and stores, with the potential to reach millions more across the country and beyond. Co-Founder and CEO of Everytable Sam Polk states: “The Compton store was very important to us. Our mission is to ensure that all have access to quality and healthy food. We knew this was critical for Compton. We want to help honor its rich history by supporting food justice in Compton.”

From start to finish, everything is designed to be super-efficient, and the savings are reflected in its prices. There are locations throughout Los Angeles from food deserts, underserved communities with little or no access to healthy food, to more affluent areas. To ensure that everyone can afford its meals, its unique pricing model enables every neighborhood to enjoy healthy, affordable meals. Hence, its name, Everytable!

Every meal you purchase, helps us open more locations across LA, including in food deserts around the city, where we sell our meals for less. Together, we can make the world a healthier and more equitable place. 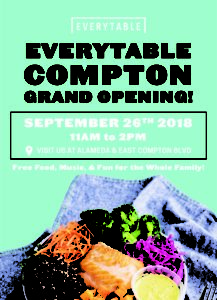